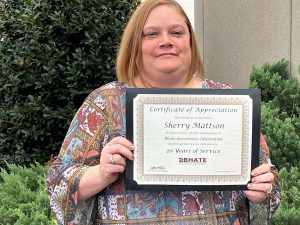 Sherry Mattson is a Senior Project Administrator in the Geotechnical/Drilling Departments celebrating her 20th anniversary at BHATE.

Throughout her 20 years, Sherry’s attention to detail has improved the efficiencies for not only the geotechnical team but BHATE overall.  Her proactive nature led to streamlining field reports, aesthetically improving report formats and reducing overhead costs.  Sherry expands upon the administration role by searching for new challenges and opportunities and increasing her influence throughout the organization by thinking outside the box.

The first large project Sherry worked on was Corridor X (Interstate 22) for ALDOT.  Sherry and the team were learning a new software compatible with ALDOT requirements and Sherry processed 159 boring logs and folded over 600 drawings into the final report.

One of her favorite memories was working with Mrs. Bhate on the Christmas Party one year.  While spending hours organizing the invites, writing name tags and planning, Mrs. Bhate told Sherry many exciting stories about her childhood and her chickens.

When Sherry is not working, she enjoys spending time with family and friends and watching Grey’s Anatomy and Supernatural.  She has two sons, Kenneth and Andrew, one daughter-in-love Joy, three grandsons Jackson, James and Jase, and her furbaby Buddy.  Kenneth joined the BHATE family on the drilling team in 2014.

Sherry is a prime example of exceeding expectations and she is considered an asset to the BHATE brand.  Thank you for your dedication for 20 years!