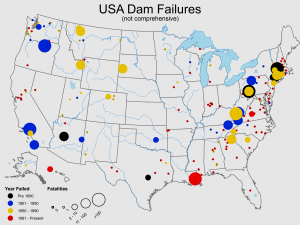 The Concerns for the Nation’s Aging Dams

The American Society of Civil Engineers (ASCE) gave the nation’s 91,000-plus dams a “D” on their latest infrastructure report card, the same grade they received in every ASCE report card since its conception in 1998. The ASCE estimated rehabilitating dams whose failure would threaten human life would cost $45 billion and the cost of fixing all dams in need of repair at more than $64 billion.

United States dams are on average 60 years old. By that age, seepage can erode a dam’s foundation as well as spillways, piping, valves and other flood management structures. Dams are vulnerable to “hazard creep” – a dam that was rated “low-hazard-potential” when it was built 30 years ago, may become a “high-hazard-potential” dam once the area becomes developed and populated.

Climate change can affect dam safety and the need to better understand hydrological conditions which are vital considerations in dam design. Assumptions about floods and precipitation when dams were built were based on a short history of hydrological data from many years ago that may not be relevant today.

Regular operation and maintenance as well as thorough and consistent inspection must be practiced throughout the lifetime of a dam. Regular inspection is essential to preserving the proper functionality of a dam and inspections should be conducted by experienced licensed professionals. Because signs of potential risk and failure often present themselves prior to a disaster, early detection of such issues through proper maintenance and inspection is essential.

Dam Safety Programs – In All States except Alabama

Responsibility for dam safety is distributed among federal agencies (FEMA, US Army Corps of Engineers, the Department of the Interior, Federal Energy Regulatory Commission and Bureau of Land Management among others), state agencies and private dam owners.

In 2020, every state has a dam safety program to ensure dams are constructed and maintained properly – except Alabama.  The US Army Corps of Engineers reports Alabama has over 2,200 dams – though there is no accurate number as there is no state agency to maintain this inventory. It is estimated only 2% of dams and 20% of “high-hazard-potential” dams in Alabama are inspected and have emergency action plans in case of failure. Alabama needs to enact a dam safety program to identify and repair aging dams, reduce the risk of future dam failures and gain the ability to leverage federal funding from FEMA for the repair of high-hazard dams.

The ASDSO (Association of State Dam Safety Officials) reports 47 dam failures and 127 non-failure incidents that occurred from 2017 to May 2020 – with 4 of those being “high-hazard-potential” dam failures.

Since a majority of dams are privately owned, many states have shifted to owner-responsible inspection systems, in which dam owners hire inspectors themselves instead of relying on state inspectors. Dam owners in Alabama need to develop detailed Operations and Maintenance (O&M) plans for the existing dams and have experienced engineers and inspectors to perform routine safety inspections.  Proper design review and construction quality controls must be instituted at the state level with any new dams constructed.

The responsibility for maintaining a safe dam rests with its owner. The owner must understand the laws and regulations associated with proper dam maintenance and the procedures for keeping these structures safe. Dam owners are also responsible for maintaining safety at and around their dam.

BHATE Geosciences has performed dam and impoundment structure designs, construction monitoring and safety inspections and assessments since the early 1970s. Our clients have included the US Army Corps of Engineers, mining companies, municipalities, private developers and private lake owners. We have the knowledge and technical expertise and performed numerous diagnostic investigations related to seepage problems, embankment stability and safety evaluations and have functioned in the role of ‘Dam Safety Engineer’.

BHATE joins in celebrating Dam Safety Day on May 31st and every day as we work to help dam owners decrease their risk levels and look forward to the establishment of Alabama’s dam safety program.