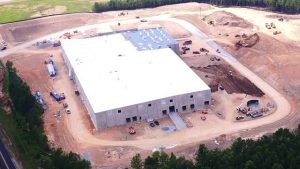 This is the first U.S. operation for the company, which wants to expand its market as a Tier 1 supplier.

A groundbreaking for the project was held in April, and the facility is scheduled to open next year.

“Thank you for welcoming us into your community, and we look forward to starting business in 2018,” said Antonio Montoro, Truck & Wheel Group’s plant manager.

Carlos Llonis Irigoyen, CEO and general manager of the company’s automotive division, said the commitment to Tuscaloosa “is based on the long-term relationship the company is willing to build.”

“Truck & Wheel Group is introducing advanced automation technology that is new to our region.”

The Truck & Wheel facility is being developed by real estate firm Graham & Co., and Cooper Construction is the general contractor. The factory will be highly robotic and automated, attaching tires to rims, inflating them and running quality assurance tests in a matter of seconds.

The two firms previously teamed up to build a 500,000-square-foot parts warehouse for the automotive sector.

The Truck & Wheel project is another sign of prosperity for Alabama’s booming auto industry, which last year surpassed the 10 million mark in cumulative auto production.

“Alabama’s auto industry continues to notch impressive manufacturing milestones, all while delivering quality vehicles that are in high demand in markets around the globe,” said Greg Canfield, secretary of the Alabama Department of Commerce.

“We are happy to work with Truck & Wheel Group and wish them many years of growth in Alabama,” he said.

Truck & Wheel began in Europe in the 1990s and now has 26 branches there. It is one of the major logistics operators in Spain, France, Germany and Portugal, and has recently opened centers in Mexico.

Dara Longgrear, executive director of the Tuscaloosa County Industry Development Authority, said the company is joining a diverse lineup of auto suppliers in the region.

“Truck & Wheel Group is introducing advanced automation technology that is new to our region,” Longgrear said. “They will make a good addition to our automotive cluster and our international community.”

“The automotive industry continues to be a great economic driver by adding more industry and jobs for not only our citizens, but for this area as a whole,” he said.

Meanwhile, Graham & Co. said it anticipates finding another built-to-suit project for auto suppliers in the near future.

Industrial brokers from Graham and others that have said the industrial market in the Birmingham area and across Alabama have benefited so much from the growth of the automotive sector that built-to-suit projects may become more common in coming months and years.