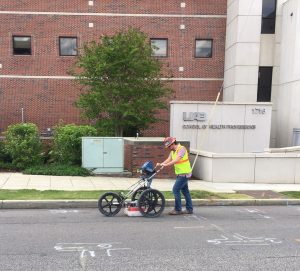 The University of Alabama at Birmingham (UAB) underwent a full upgrade of the subsurface steam system across its campus, which consists of nearly 100 city blocks. The subsurface utility infrastructure on the campus serves academic buildings, a major hospital complex and several highly specialized and sensitive research buildings as well as the VA Medical Complex.

UAB’s campus is underlain by a broad range of utilities including traditional utilities, as well as steam lines, oxygen and nitrogen lines, chilled water lines, fiber optic and other similar infrastructure used in hospitals and healthcare buildings.

UAB traces its roots back to the 1930s with the opening of the Birmingham Extension Center of the University of Alabama.  As a result, detailed, as-built utility maps were not available. The installation of a steam system to serve the entire UAB campus was expected to require substantial excavation.  Given the age of the campus and the limited underground utility information, there was a strong possibility that potential conflicts with existing underground utilities and underground structures might exist.

BHATE Geosciences utilized ground penetrating radar (GPR) to accurately map underground utility lines to prevent utility line strikes during the large-scale utility upgrade.  Data we obtained from our GPR scans was used to determine the final alignment of their new sewer system and their project was completed without delays, damage or change orders.

BHATE provided our client with useful and accurate utility maps for a large section of the campus and saved them millions of dollars in excavation costs, change orders or utility relocations.  We have a long-standing relationship with UAB since the 1970s and are proud to be part of such a significant project that provided them with this knowledge and cost savings.

Interested in BHATE’s GPR services? Contact us now for more info on our GPR services or a quote.