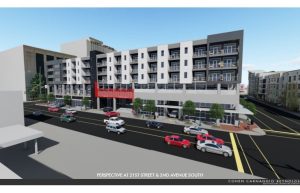 The Design Review Committee this week approved plans for the third building of the 20 Midtown development, which will be located on an entire block between 20th Street and Richard Arrington Jr. Blvd., and between Second and Third Avenues South.

Site demolition, clearing and grading has already been completed and the building is expected to start construction soon.

The project will include 246 apartment units as well as retail space according to Dick Schmalz the project developer.  The entire 20 Midtown project has already served as catalyst for interest in surrounding properties in the area that is often called Midtown. Cohen Carnaggio Reynolds is the project architect.

BHATE Geosciences is proud to be a part of this project team and has provided all of the subsurface engineering, environmental and testing services on the entire 20 Midtown development.